Keep a Fire Burning in the Snow 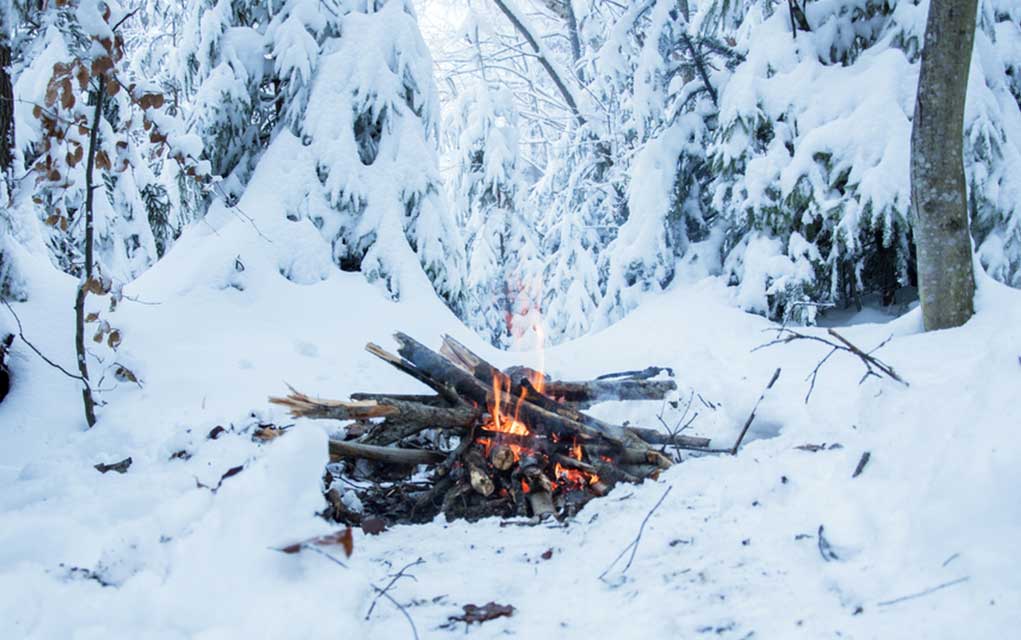 (Modern Survival.org) – Starting a fire on the snow isn’t any more difficult than starting any other survival fire. However, keeping the fire burning is harder.

Once a fire is established, the underlying snow will begin to melt, extinguishing the embers. Before long, all that will be left is a pile of blackened, soggy wood. Survival could depend on the warmth of a fire, so it’s critical to learn how to keep it from going out once it’s lit.

There are ways to keep a fire burning on the snow, but doing so requires a little know-how. Let’s take a look at a few effective methods.

One way to keep a fire burning in snowy conditions is to dig a hole through the snow down to the ground beneath, then build your fire there. Skip going beyond ground level, as it will likely be hard to dig up. The surrounding snow could also melt and fill in the pit, defeating the purpose of getting to ground level.

This method does come with some drawbacks. First, digging through the snow will burn precious calories in a true survival situation. Second, if the snow is too deep, it may not be worth the effort to try and reach the ground. Tunneling through four or five feet of snow to build a fire isn’t a good idea. In this case, the next method is the best bet.

Give the Fire Some Support

Sometimes, digging to the ground simply isn’t an option, so the fire will have to be built on top of the snow. In order to make this work, a platform is required to keep the melting snow from snuffing out the fire. Using large pieces of firewood on the bottom can give the fire time to become well established before it gets to the melting snow. Freshly cut, green logs work best, as they’re already wet. The green wood takes a long time to burn, which gives the fire more time to grow.

Eventually, the fire will burn through the protective layer beneath it. Be prepared by building a secondary fire that’s ready to go by the time the first reaches the snow and goes out. Embers from the first fire can then be transferred to the secondary fire using a shovel or even makeshift wooden tongs.

Pay Attention to the Surroundings

Choosing where to build a fire is important. Overhanging, snow-covered branches can rain down slush onto both you and the fire, which increases the risk of hypothermia in a survival situation. Both becoming wet and losing the fire can quickly become a fatal recipe for disaster.

When facing a life or death survival event in the snow, the main focus should be on finding or creating a shelter first, then creating a fire. To see how to use the snow itself for creating a survival shelter, check out this article.